a work of arturo tedeschi

“The art of the storyboard deserves attention not only for the graphic quality, the technique or the rapid stroke, but as a creative bridge between the script and the film or, if you prefer, as a link between the language and the images AI systems have moved beyond the “traditional” process where high-resolution images were created based on a set of pre-existing images. Cutting-edge systems like DALL E have learned the relationship between image and the text used to describe them,’ writes Tedeschi.

Featuring storyboard text inspired by films such as “Pulp Fiction” and “Back to the Future”, the project reveals how meaningful new possibilities can be unlocked using this fascinating technology.

from ‘manhattan’ to ‘pulp fiction’

Tedeschi (see more here) created the first image using text describing a famous scene from Woody Allen’s masterpiece, “Manhattan.” The description is as follows: ‘A b/w scene of a man and a woman sitting on a bench, in New York, the Queensboro bridge in the background, foggy atmosphere.’

Returning to the AI, the artist asked SLAB work as a storyboard artist using the description selected above; to complete the toolkit, Tedeschi added some photos of the Queensboro Bridge to better represent the scene. The resulting images were created in 15 seconds.

‘It’s very interesting to see how the AI ​​merges “archetypal” concepts (man, woman, sitting, bench) with elements derived from using real-world descriptions: the phrase “Queensboro Bridge” triggered – as well as the generation of the bridge itself – realistic and specific urban details like trees, the skyline,’ he comments. 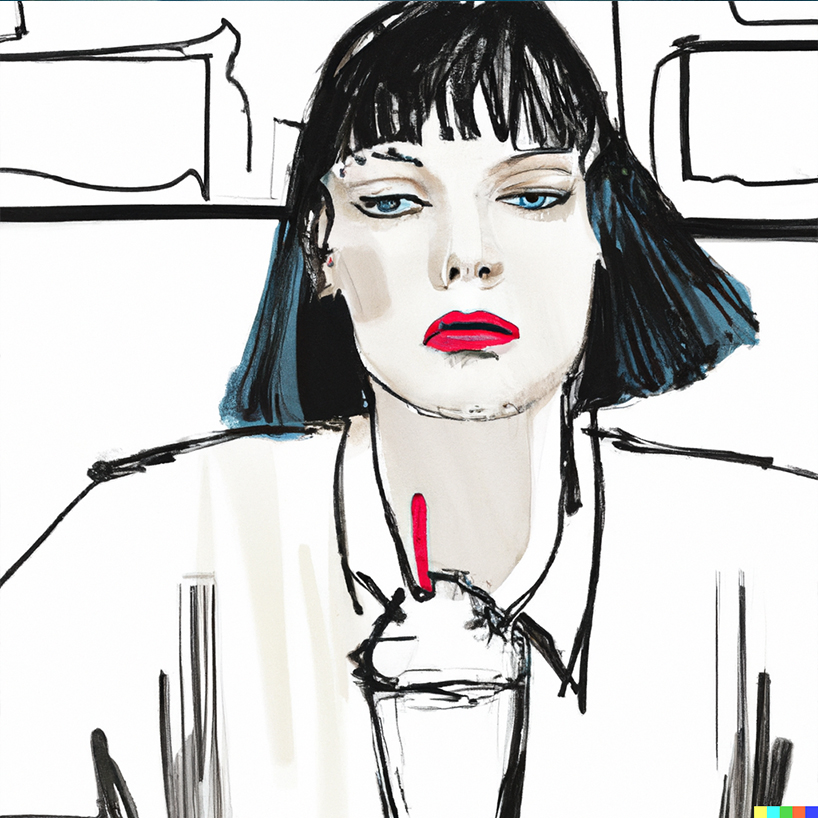 (Pulp Fiction) ‘a sketch of a woman with big blue eyes, thin nose, red lipstick and black bob with bangs, wearing a white shirt, sitting at a table, drinking a milkshake through a straw’

In a second experiment, Tedeschi attempted to portray the fictional character of Mia Wallace from “Pulp Fiction” using the following description: “a sketch of a woman with big blue eyes and a black bob with bangs sitting at a table and drinking a milkshake through a straw, American bar background.’

The first iteration generated a naive sketch which was surprisingly improved by adding a few more details: ‘a sketch of a woman with big blue eyes, a thin nose and a black bob with bangs, dressed in a white shirt, sitting at a table, drinking a milkshake with a straw, american bar background ‘.

Using “serious woman” and adding “with lipstick” and “white shirt” was enough to bring some sketches closer to the original character. 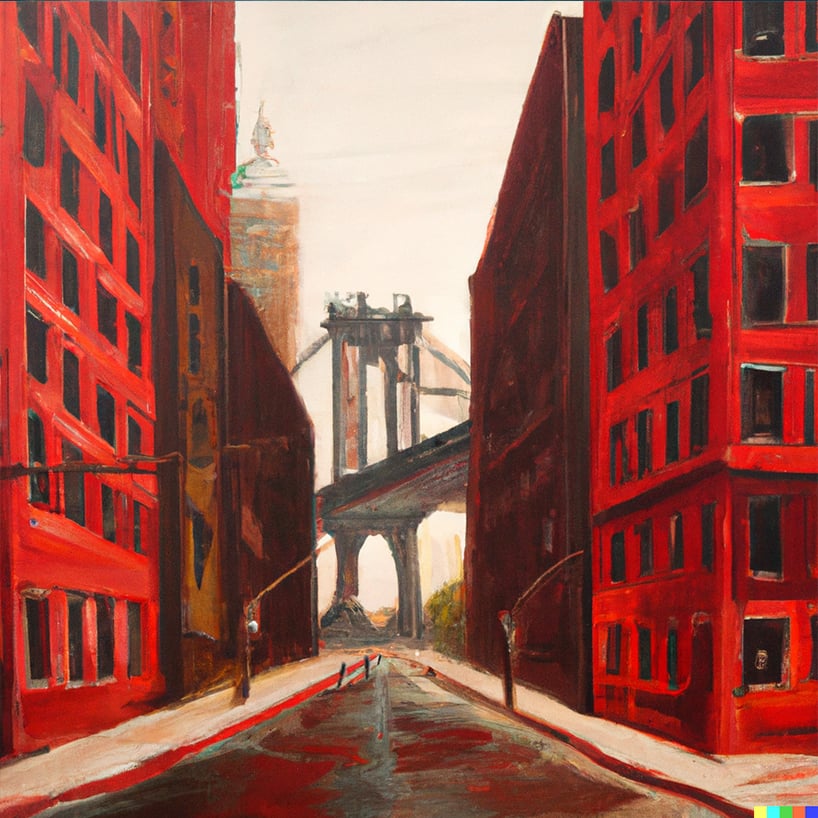 (Once Upon a Time in America) ‘an oil painting of a street with red buildings on both sides and the giant Manhattan Bridge in the background, central perspective, human silhouettes’

The search continued with scenes from other movies like “Ex Machina,” “Once Upon a Time in America,” “Blade Runner,” and “Back to the Future.” Tedeschi concludes by writing: ‘The results demonstrated that AI can be used immediately as a powerful and fast companion for visualizing ideas. In the future, systems like DALL-E will probably be integrated into the design process. More than a tool, AI will likely expand our possibilities and our way of creating things, without taking over the human creative process. 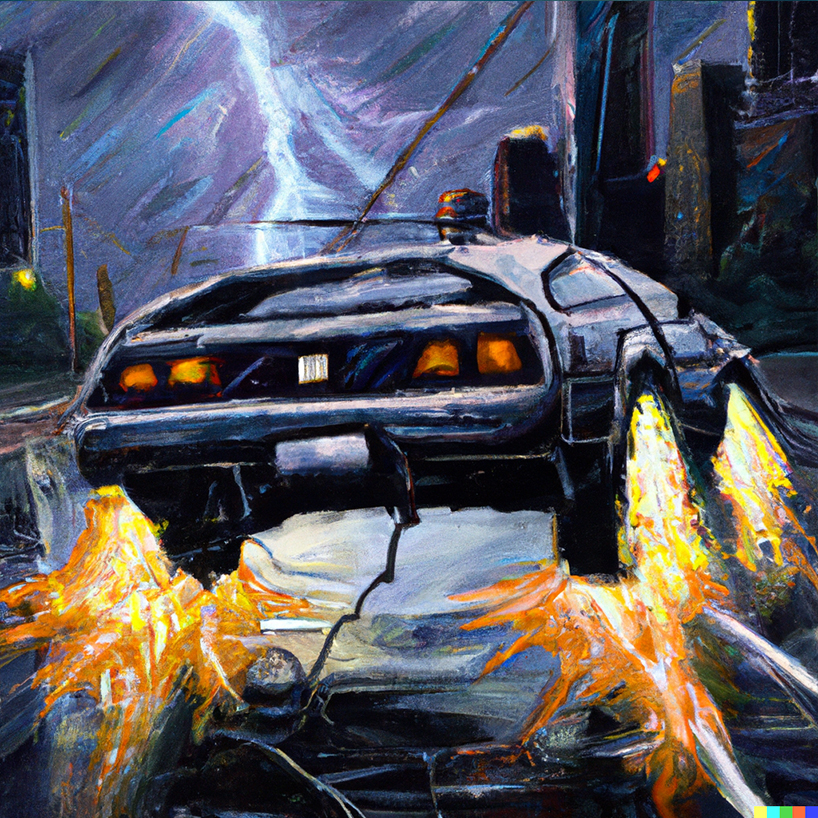 (Back to the future) ‘an oil painting of a Delorean dmc12 struck by lightning, dark city background, wet road’ 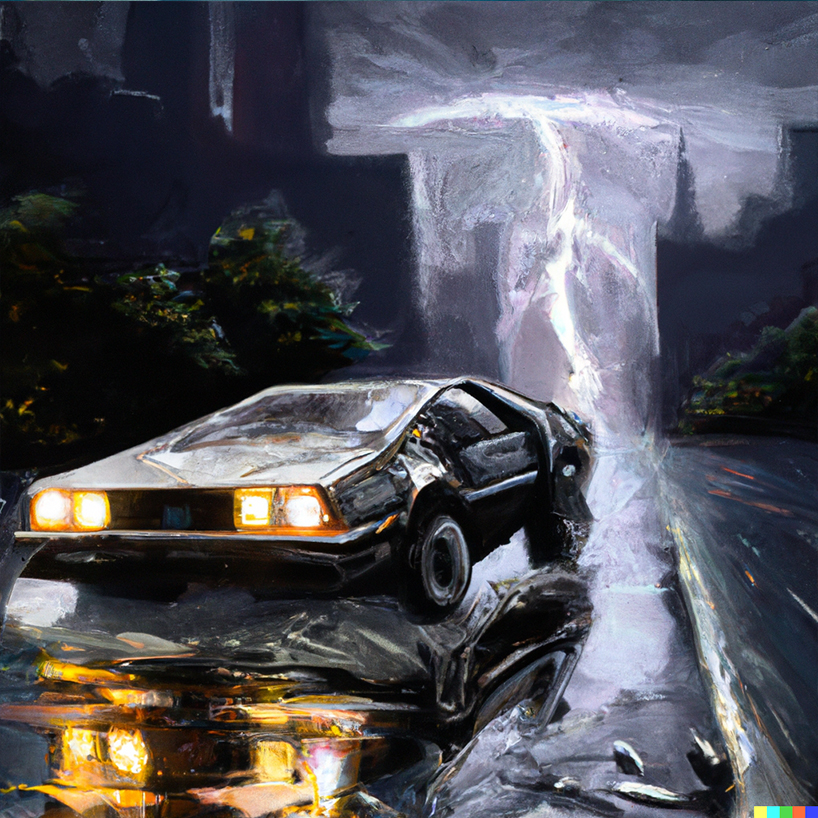 (Back to the future)