When did it become so impossible for movies to leave things unsaid? We humans are always on the lookout for answers, but sometimes the best way to tell stories is to leave a little bit of a mystery behind. It may not necessarily be crucial to know what’s in that suitcase. pulp Fiction, only that it is really important for Marcellus Wallace. And maybe we don’t need to know what turned someone into the mad Joker, only that their sociopathic anarchism is a threat to normalcy. There are times when the answer in your head provides more of an emotional kick than a superfluous origin story.

The two major press releases this week are both victims of this constraint to fill in the blanks that it is better to leave blank. A Quiet Place, Part II—Director John Krasinski’s sequel to 2018’s hit alien invasion thriller – opens with a 10-minute prologue that takes us back to “Day 1” of the arrival of blind, sound-sensitive alien predators. It’s a story the original didn’t feel the need to provide, as it immersed us directly in the plight of the Abbott family – father Lee (Krasinski), mother Evelyn (Emily Blunt), daughter Regan (Millicent) Simmonds) and son Marcus (Noah Jupe) —and the advantage in their ability to communicate in ASL due to Regan’s deafness. The flashback here looks like a filler, serving primarily to introduce family friend Emmett (Cillian Murphy), whom the Abbotts would later meet, and provide Krasinski with a cameo as Lee sacrificed himself in the first film, and would otherwise have no opportunity in this film. to place his finger on his lips with ominous intensity.

Things get back on track once the main storyline kicks off, picking up more or less immediately after the events of the original, with Evelyn’s newborn baby added to the family. Searching for other survivors, the Abbotts hook up with Emmett, but Regan soon sets out on her own, convinced that the weapon she discovered while boosting the frequency of her cochlear implant could save others. Simmonds’ performance offers a welcome intensity, and Dividing the Family is a solid dramatic choice. There’s just a weird rhythm issue with Part IIbecause long periods of nothing happening are suddenly juxtaposed with times when EVERYTHING IS HAPPENING AT THE SAME TIME, STRONGLY AND DANGEROUSLY. But at least it’s a movie that ultimately cares more about what happens next than what happened before. 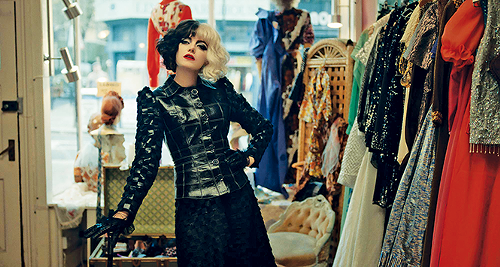 This is not the case remotely with Cruella, following the example of tales like Maleficent and Joker who are convinced that iconic villains need a complex story. Here we learn that a young girl named Estella has been orphaned and has come into contact with street criminals Jasper and Horace. As a young woman, Estella (Emma Stone) attempts to pursue her dream of becoming a fashion designer, as an apprentice to the Frozen Baroness (Emma Thompson) before ultimately losing her dark side alter ego of Cruella as rival of the baroness. .

What follows starts to sound like a frantic riff on The devil wears Prada, although every 20 minutes or so there is an attempted robbery from Jasper (Joel Fry) and Horace (Paul Walter Hauser). Of course we also have enough 101 Dalmatians the references became irritating each time they came, from the sharp inclusion of characters named Roger and Anita, to a scene where – I would have liked to make it up – Estella develops a certain loathing because the Dalmatians killed her mother.

The real irony, however, is how quickly it becomes clear that giving Estella / Cruella motivations, feelings, and stuff makes her a lot less interesting than this movie’s villain. Stone is fine, especially when posing fiercely in Jenny Beavan’s outrageous costumes, but Thompson steals every moment that she’s onscreen. It’s not just because she’s, well, Emma Thompson, and the fabulous oozes from her pores; that’s because a determined villain is almost always the most interesting and memorable role. By telling a story that no one demanded, we should tell, Cruella ends up being at its best proving it was completely unnecessary – and making you fear that in a few years someone will decide that we really need a Disney + series on The chronicles of the young baroness.

Worlds Beyond: How The Chronicles Of Narnia ...

10 most shocking deaths in DC Comics