Recollections of Recipes Contributed to the Bushey Cookbook in the 1900s

A group of Bushey residents engaged in a charitable endeavor to collect “300 Truly Reliable Recipes” in 1909. They solicited family, friends and neighbors for a selection of recipes, as well as tips and tricks for cooking. House ; curse local traders in their plans. The result was the Bushey Book of What to Cook and How to Cook It, the product of which was intended to “increase Watford Circuit Bazaar revenue” held in November of the same year. As far as I know this was a Methodist run fundraising business printed by Ingram Clark & ​​Co, Ilfracombe and probably a national initiative.

One copy was bought for one shilling (5p) by my grandmother, Agnes Humphries, who had left her home in Bourton-on-the-Water, Gloucestershire, in the footsteps of her older sister Elizabeth, then a living housewife at Pinner Road, Oxhey. Elizabeth undoubtedly alerted Agnes to a domestic service position with Dr Wimble, a well-respected physician and surgeon, at 47 Chalk Hill, Oxhey. My grandmother had to work there for several years.

Her little Bushey cookbook, which bears her notes, includes advertisements from local shops and businesses, and recipes provided by ladies from Bushey, Watford and Rickmansworth and, surprisingly, Buenos Ayres. [sic], New York, Montreal and the Cape Colony [Cape of Good Hope]. At home, a Ms. Ellis B Staples of Bushey enthusiast submitted recipes for salted butter beans, “boiled then simmered for up to two hours and covered in cheese sauce”; Salted cauliflower; Beef roll; A good chocolate cake; and an inexpensive Christmas cake. Ms Chadborn, also from Bushey, provided her Scottish egg recipe: “fried in boiling lard, cut in the center and decorated with watercress or parsley”. Another Bushey resident, Ms Moulton, opted for baked bananas with orange sauce.

A number of recipe names and ingredients recall the time: Military pudding (lard, sugar, zest and juice of a lemon mixed with breadcrumbs, placed in a buttered and well boiled mold); Half-pay pudding; Omnibus Pudding; Prince of Wales Cream; and railroad pudding. I must have looked at a recipe twice. Ammonia cake. A four egg sponge with currants and milk and a teaspoon of ammonia!

‘Minced meat. three lemons, three apples, 1 lb pitted raisins, 1/2 lb gooseberries, 1 lb tallow, 2 lb barbados [sic] sugar, 1 ounce of citron, orange and lemon zest, half a cup of orange marmalade, a small amount of brandy if approved, add spices and nutmeg to taste. Preparation: Grate the zest of the lemons and squeeze the juice, filter it and boil the rest of the lemons until they are tender. Chop very finely; Core, peel and slice the apples, then add the other ingredients and mix everything well, place them in jars, tie them with baking paper. In about 14 days it will be ready for use. ‘

And ‘Homemade marmalade. 12 Seville oranges and two sweet oranges; cut in half, carefully remove seeds, thinly slice with patented slicer and to each pound of fruit add three quarts of water. Let sit for 24 hours. The added juice of two lemons is a big improvement. Boil the fruit for two hours. Let it cool, then add 1 lb of sugar to every lb of pulp. Slowly boil again for an hour. Place in jars and tie. Marmalade made in this way is very economical and will cost only about 2¼d or 2½d [less than one new pence] a book.’ 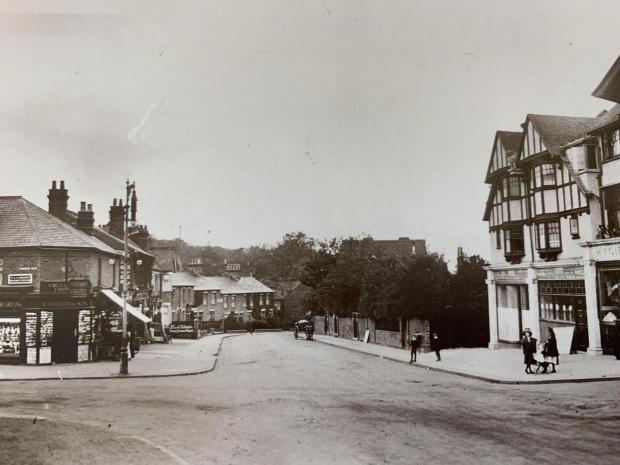 Vale’s Stores, near the corner of Chalk Hill, two doors down from WH Smith, circa 1910

In 1983, while on the board of the Oxhey Village Environment Group (OVEG), I suggested a cookbook and home tips book, based on my grandmother’s Bushey book. As in 1909, family, friends, neighbors and OVEG members were invited to contribute their favorite recipes, while Ian Mackay, the creator of the impressive OVEG posters, designed the book cover. 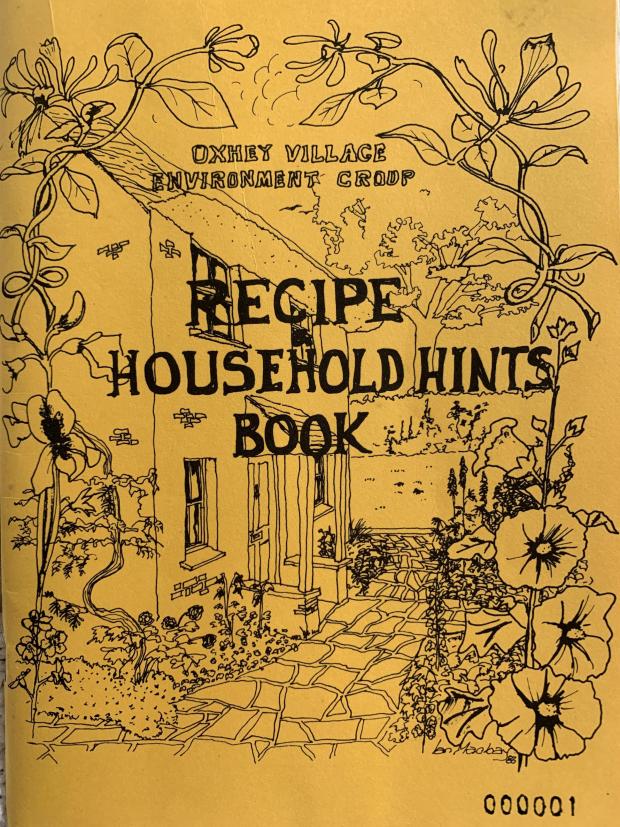 Little Jennifer Cannard, daughter of loyal OVEG board member Marian, was elated when she saw her Chocolate Krispies and Scone recipes included in the book. Miss Marjorie Bray, the well-respected local Oxhey historian, contributed to a recipe for Watford Heath Crumble Pudding that she had seen in an 1882 copy of St. Matthew’s Magazine: “Three tablespoons of flour, one ounce of zest, a quart of milk and 1/2 lb of molasses. Mix the flour into a paste with the cold milk. Put the rest of the milk in a saucepan. Add the flour, stir and boil until thickened. Stir in the molasses and finely chopped zest and place in a pie dish. Bake fast for half an hour.

I couldn’t resist including several recipes and household tips from my grandmother’s book in the OVEG publication. After all, that had been the inspiration. The OVEG Recipe & Household Hints Book was first published in 200 copies in June 1983 to coincide with the annual OVEG Fayre. It was reprinted in March 1989 with a new circulation of 260 copies, which quickly sold out. Vintage maybe, but mine has served well! Are readers still using theirs?

Lesley is the daughter of the late Ted Parrish, a well-known local historian and documentary maker. He wrote 96 nostalgic articles for the Evening Post-Echo in 1982-83 which have since been published in Echoes of Old Watford, Bushey & Oxhey, available at www.pastdayspublishing.com and Bushey Museum. Lesley is currently working on Two Lives, Two World Wars, a complementary volume that explores the life and war experiences of his father and grandfather, in which the story of Watford, Bushey & Oxhey will once again be on stage.

The story of Vancouver’s oldest gay and ...