The Queen of Port Washington pulps


A former resident of Port Washington, Daisy Bacon was known as one of New York City’s highest paid editors of the 1930s. Bacon’s professional career includes being editor of numerous pulp fiction magazines. in the 1940s, inspiring other women with her career and feminist activism to speak out against discrimination.

Bacon was born on May 23, 1898 in Union City, Pennsylvania. During the 1930s, she moved to Manhattan to pursue her writing career and quickly became editor-in-chief of many pulp magazines, fictitious magazines that were very popular in the late 1950s. The term pulp comes from pulp paper. cheap wood, on which magazines were printed. Love story magazine was one of Bacon’s most beloved pulp magazine publications, on which she worked until 1947. The magazine circulated from 2,000 to 3,000 readers per month with enormous popularity. 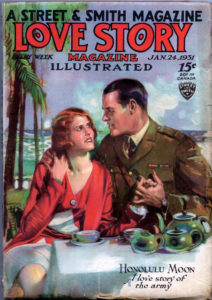 Bacon was known as a “lucky” editor for providing opportunities for new writers. She received and read unsolicited manuscripts every year to care for passionate writers. During World War II, Bacon was able to work with various media companies. She became a consulting columnist for Street & Smith Publications, a New York-based publisher specializing in paperbacks and magazines often referred to as dime novels, as well as pulp fiction magazines. Bacon also edited Detective Story Magazine, The Shadow and Doc savage during their last year of publication.

Bacon retired in the 1950s and worked on Writer of love stories, a guide on how to successfully sell romance in publications. She then moved to Baxter Estates. In the 1960s, Bacon started his own publishing house, Gemini Books. Bacon and his younger sister Esther Ford Robinson have established a scholarship fund in Bacon’s name, which continues to benefit local students at Port Washington High School who wish to pursue a career in journalism. Bacon died on March 1, 1986 at home at the age of 87. When he died, Bacon’s immediate neighbors, Nora and Bill Haagenson, recovered his personal papers and kept them for 25 years.

In 2016, Nora Haagenson, former mayor of Baxter Estates, along with her husband, dedicated an entire exhibit in honor of Bacon located in the Baxter Estate Village Hall. The exhibition contains Bacon’s desk, manuscripts, a typewriter and some photographs from the period.

Laurie Powers, writer, photographer and pulp fiction enthusiast, contacted the Haagensons to review Bacon’s personal papers. Powers pulled out his book, The queen of pulps: the reign of Daisy Bacon and Love story magazine, October 8.
Powers developed a particular interest in pulp fiction publications when she discovered that her paternal grandfather, Paul S. Powers, had been a successful writer. He had appeared in many magazines, such as Strange Tales, Wild West Weekly, Western Story Magazine and Tales of real detectives.

“I’ve learned that the most popular pulp fiction magazine is the one that publishes love stories and not the detective, adventure, and horror stories that people always think of when they think of pulp fiction.” , said Powers.

Powers became interested in Bacon’s story because of his ability to stand out in an era when women were still seen as inferior to men. Bacon was an advocate for young women because she always mentioned the importance for young women to first establish a career instead of entering into marriage.

“She was the editor of a romance magazine, but she never married. I thought it was very ironic and wanted to know more, ”Powers said of his initial interest in Bacon’s legacy.

Powers describes Bacon as a brilliant businesswoman, feminist and editor. Most of those who met Bacon during her years in Port Washington probably knew her only as a quiet woman who loved cats, but many locals may not know that she was once a well-known woman. Anyone who picked up a newspaper in the 1930s and 1940s might have seen one of Bacons’ articles.

“It’s safe to say that Queen of the Pulps isn’t just a biography, it’s also a love story,” Powers said. “A love story within a love story, if you will.”

Power’s Book contains exclusive access to Bacon’s personal documents, which tell the story of the woman who inspired many to seek independence in their careers and relationships. Queen of pulps: the reign of Daisy Bacon and Love Story Magazine is available for purchase from Amazon.com or McFarlandBooks.com.

Why some of the best fictions of ...

From India to the world